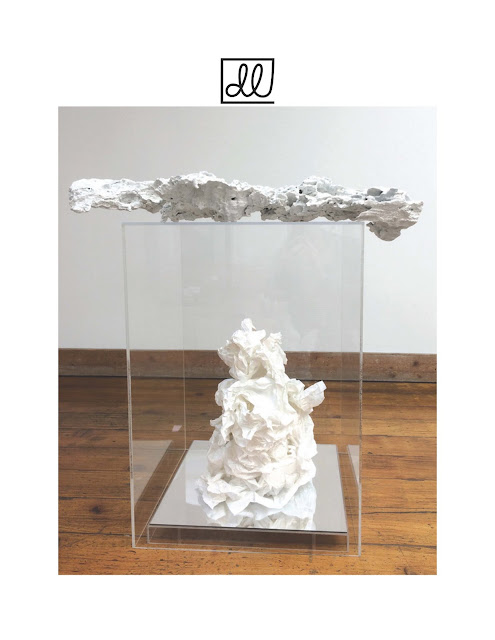 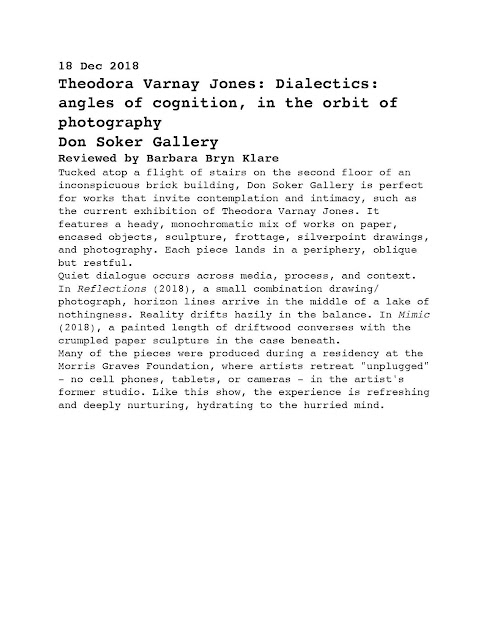 Posted by Theodora Varnay Jones at 10:32 AM No comments:

The sixteen conceptual works by Theodora Varnay Jones in “Dialectics: angles of cognition, in the orbit of photography” do not reveal themselves quickly — as one might suspect, given their daunting title. Yet these multimedia works, featuring black and white photographs, graphite rubbing, and contour-line drawings on layers of paper (including Yupo and Japanese Gampi paper), Plexiglas and vellum, reward attentive scrutiny. Varnay Jones combines a love of materials, process and craftsmanship — the frames that she fabricates are integral parts of the artworks — with a concern for perception and philosophy. She particularly draws on Plato, who posited a perfect world beyond mundane appearances. Her works dialectically synthesize objectivity and subjectivity as the paintings of Cézanne and the Cubists (both influences) did; they combine multiple views to suggest the complex identity of objects and observer in the changing and timeless worlds of nature and modern life. “One perception is not enough for me,” the artist has said, ”I am combining different views.”

Varnay Jones considers photography and frottage (rubbings) to be similar, since they are both directly related to the objects that they depict: they’re emanations, in a way. In several pieces in the show — “ F-11 (Homage to M.G.),“ “F-9” and “F-10” — the titles designate frottage. These were inspired by the artist’s residences during the past two years, in rural, quiet and technology-averse studios north of San Francisco: at the Lucid Art Foundation, in the Marin County town of Inverness, in fact in the former studio of the late Surrealist/abstractionist Gordon Onslow Ford; and at the Morris Graves Foundation, in Humboldt County. Frottage in these magical time-warp locations became a non-photographic way to ‘record’ intriguing objects — Graves’s kitchen table, in this case — and to create an alternate object for further exploration. The rubbings, made on opaque and translucent papers, superimpose, but not precisely, a sense of movement and change, of depth and time. Other works take the same quiet route to mystery. An untitled, unframed wall piece of crumpled paper, irregularly circular and pleated, and coated with dark, glossy graphite, suggests a silent mineral world (as well as Max Ernst’s Surrealist 1925 frottage, “The Earth As Seen From the Earth”). A series of silverpoint botanical drawings and layered and flipped river-landscape photographs pay homage to Humboldt County’s natural glories, but transmute them into ambiguous symbols, floating worlds and vehicles for reverie. A pair of assisted-readymade sculptures (painted and repaired with gilding, kintsugi-style, or juxtaposed with other elements), transform a piece of fissured wood and a jumble of the protective paper removed from Plexiglas, “Mimic” and “Variant,” respectively, and show again that creative value can be coaxed from the most mundane materials.
Posted by Theodora Varnay Jones at 12:32 PM No comments:


DIALECTICS: angles of cognition, in the orbit of photographyNovember 10 - December 22 2018

Theodora Varnay Jones has always had a deep interest in the works of Paul Cezanne who transformed landscape painting; most radically explicitly acknowledging that what is real in art is different and independent from the actuality of nature.
The natural world is referenced in many of Varnay Jones’ recent works. However, in her complex, layered images and sculptures, the depicted shapes and forms no longer represent any of the source objects. Their implications are their fugitive nature and changing contextual meaning.
Rubbing, her choice of drawing technique for many of her new works has an almost photographic accuracy, yet still revealing some of her hand’s control in the process. She traces several viewpoints of her source materials, and then layers them in combination with line drawings or ghostly duplicate shapes of the depicted original.
Additionally she explores the ambiguities found in reflections. Her drawings combined with, or based on photography, question the domineering role of the optical reality.
Her intent of a dialogue between components is unsettled, evoking memories as well as empirical and philosophical questions.
Consistently working in just shades of grey, she aims to strip away associations and limitations that colors would introduce to her work. The details of her works become the essential factors as universal interrelationships of context and process inform one other. 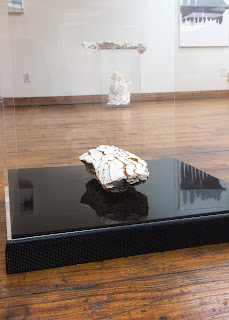 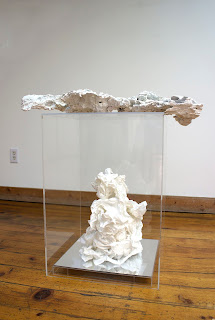 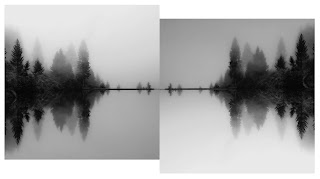 Reflections
Posted by Theodora Varnay Jones at 10:39 AM No comments:

My entire Landscape series, comprised of 10 color etchings
were acquired by the Turner in 2017

Posted by Theodora Varnay Jones at 7:53 PM No comments: